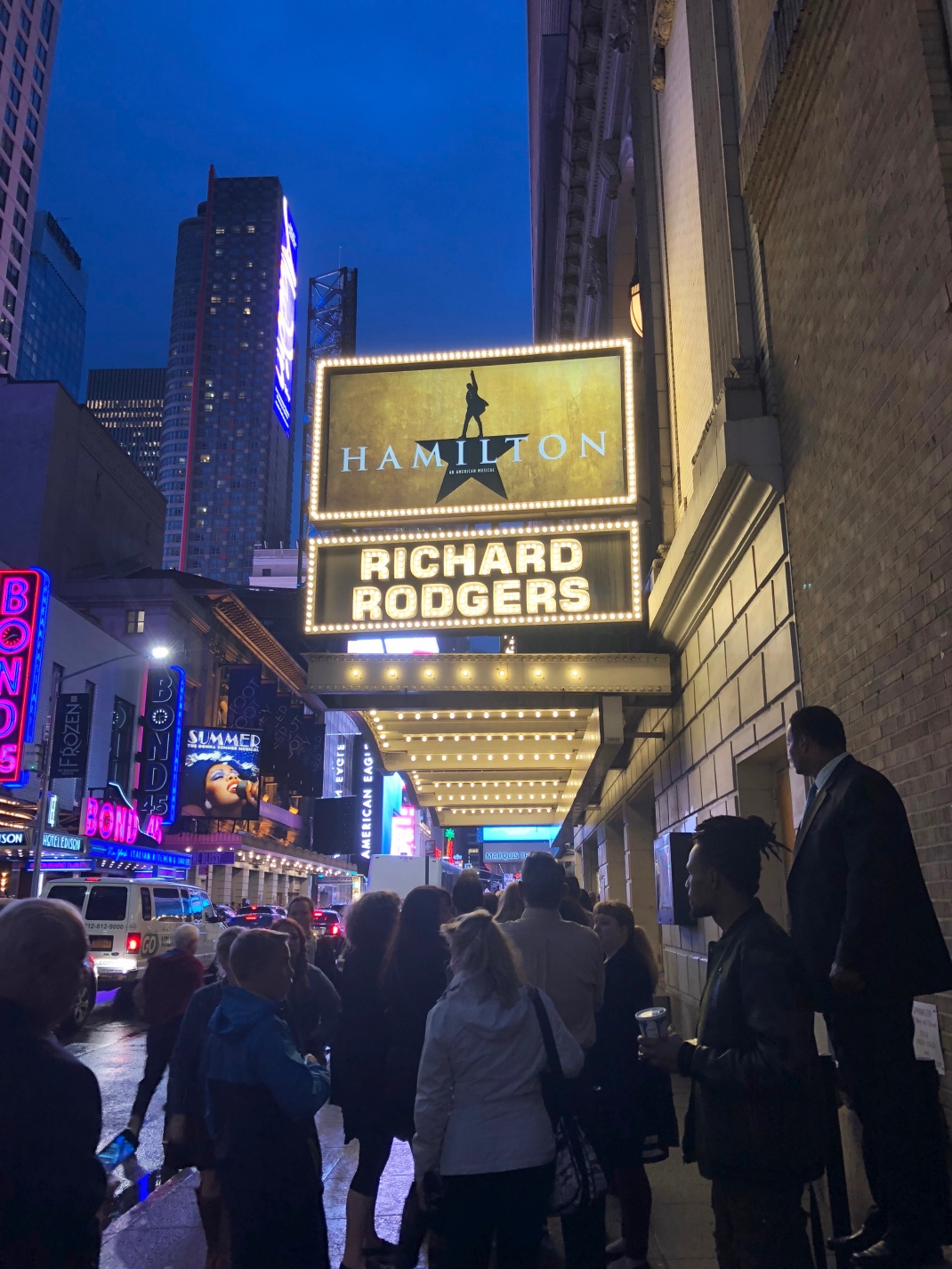 Hamilton, the critically successful musical that opened on Broadway in 2015 and won the Pulitzer Prize for Drama in 2016, is based on the 2004 biography written by historian Ron Chernow. The play traces the rise of Alexander Hamilton, an orphaned immigrant from the Caribbean island of Nevis, into one of America’s Founding Fathers, all set against the turbulent backdrop of the birth of the nation. Of course, it ends with the famous duel between him and Aaron Burr.

Regardless of the critical acclaim, the winning of 11 Tony awards, and the unprecedented ticket sales in spite of the  exorbitant prices, this show is truly stunning. Why? Because it is singularly unique, even for your usual spectacular Broadway musical. Amid a minimal set composed of a couple moving staircases, with minimal costumes involving a change of coats or hats, and with “color-conscientious” casting that reflects the diversity of America today, this show is all about the music and the history.

The entire story is told in song and rap, in American musical forms: hip/hop, R&B, pop, soul and traditional Broadway show tunes. There are no big fantastic technics in this production, no chandeliers as in Phantom, no barricades as in Les Miséarables, no tire as in Cats. There is only the sheer genius of Lin-Manuel Miranda (the writer who also played the role of Hamilton in the original cast) and his lyrics, music, and story to keep the audience, even youngsters, thoroughly captivated for more than three hours. Even in “the cheap seats,” in the third tier where I was seated, it was beyond wonderful.

Another factor contributing to Hamilton’s runaway success is no doubt the current political climate we find ourselves in as a nation right now. The incendiary rhetoric, the inflamed passions, and the premeditated positioning for power were all there in the early days of the Republic as they are today; cultural issues of class, race, and national origin, along with a general distrust of “the other,” were as dangerous and divisive then as they are now. And yet, here is a history we all share. There are explicit messages for us in this show, as well as a warning about the futility of “a duel to the death.”

Thus has the lesson of history been revived for hundreds of schoolchildren attending Hamilton, and thus was a perspective revived for me, as well. Not only did the show give me pause for thought and hope, but time spent in New York, a city I dearly love and which is arguably the greatest, most culturally-diverse and culturally-rich city in the United States, gave me a renewed perspective about what America really is, what it was meant to be. It enabled me to come home again and to face the often rigid provincialism of where I live. I don’t mean to accept it, mind you, but to face it with some hope and forbearance. (Indeed, the long lines at my local polling place this week and the unprecedented early voter turnout across the country is hope made visible.)

From New York we went on into Connecticut for a few days. Wishing for a beautiful explosion of fall colors, we were, alas, disappointed. Days upon days of heavy rain and unusually warm temperatures meant that most leaves had been washed away and the remaining few simply withered and died. It was not pretty. But it was familiar and comforting. The coolish weather “felt like fall” at least, and the drive to favorite places in upstate Connecticut (Kent, Cornwall, Litchfield) revived me. It has been too long (three years) since I was in New England in autumn, and I have sorely missed it.

So my own history has been revived from a visit to where I used to live for so long and so long ago. We get trapped in the present, and in the problems of the present, and often need the release of revisiting the past, our past, to remember who we are. Whether it’s national history or personal history, knowledge of he past can reconstitute us in the present and reveal new ways to move forward.

And now that I’ve come home, I have finally, finally finished this art quilt I’ve been working on for six months for entry into a juried show. The theme of the exhibition is “Forced to Flee,” depicting those who have had to flee their homes/homelands because of war, famine, natural disasters, and other conditions beyond their control. My piece, titled “Toward Za’atari,” depicts early Syrian refugees in the desert in Jordan, migrating to find a better life. I took the photo in the desert when I was there several years ago, and it has haunted me ever since. When the call came out for this particular exhibition, I knew I had the perfect image for inspiration.

But translating this photo into an art quilt has been a real challenge for me , full of false starts and bad decisions, ripping out and re-doing, lack of concentration and loss of confidence. In all the years I have been quilting and working with fabrics, I have never, never experienced the frustration that this project has brought me. Yet, I have persevered and I feel that “Toward Za’atari” is respectable work.

In the world of art quilting — in any art, really— gaining acceptance into a global exhibition is always an artistic reach, but in this case, acceptance became beside the point. For me, it was the personal achievement of completing the work and meeting the deadline, of doing what I set out to do. That’s who I am, I recall.  It is my history revived.