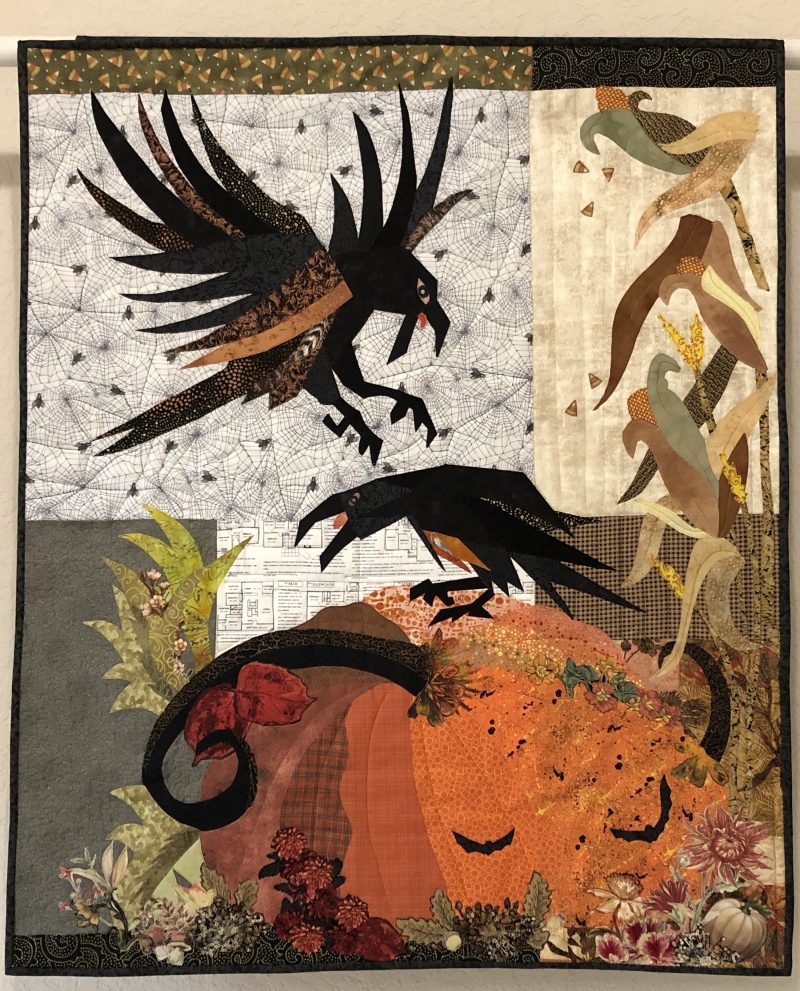 My mother was a doll house miniaturist. Knowing how much I have always loved Halloween, she surprised me in 1993 with a fully furnished and decorated haunted house she had made for my birthday. She shipped it up in a huge box from her home in Texas to my home in Connecticut. Not only was it a big surprise, but it was all the more special because she had put her own time and talent into making it. That house has survived three moves and, though it is looking a little more dilapidated these days, it has continued to be displayed in our home every year, including this one. (See photo of it on my journal post dated Oct. 30, 2019.)

Today is my son’s birthday and, in the tradition of my mother, I made him the quilted wall hanging shown above. His home is mid-century modern in style, orange, gray and white in color scheme, and completely devoid of tchotchkes and clutter of any kind. With that description, need I mention that he is an architect? Need I add that he is very particular about his living space? But he LOVED this art quilt — he really did — and it pleases me to share with him my art and my fondness for Halloween. (If you look closely, you can see a section of white fabric printed with architectural floor plans just above the large pumpkin.)

I must confess that this is not my original design, but is based on a pattern named “Jack” for a collage quilt by Laura Heine (Fireworks Inc. in Billings, MT.) I adapted it to the materials I had on hand, of course, and did not follow her instructions for collage, choosing instead to do the whole thing in appliqué and free-motion quilting. I was drawn to the overall pattern because of its highly stylized interpretation of a familiar Jack o’lantern theme and was originally planning to make it for myself if I could find the time. But then my son came over one day and saw the pattern lying on the table in my sewing room and kept commenting on how different it was and how much he liked it. Since I never know what to get him for gift occasions, and since my shopping these days is pretty much limited to the grocery store, I decided to set aside the art quilt I’m currently working on and press that sewing machine pedal to the floor to get this one done by his birthday. Seeing how happy and surprised he was to find it completed and realizing that it was for him made the stress of a completion deadline worth it.

Working on a piece named “Jack” clearly referencing a Jack o’lantern got me to wondering where that term originated. I discovered that the name Jack has been a generic name for a man or boy, often a peasant, since the Middle Ages. It is not necessarily pejorative, and is even a preferred nickname for the more formal name of “John,” as in Jack Kennedy. In the 1700s, a jack was slang for a farthing in Britain; gradually it  began to mean a little of anything or nothing at all, such as in “You don’t know jack,” or “It don’t mean jack,” or a “Jack of all trades.” In contemporary language, a jack can be either a male donkey, a jackass (the female being a jennet), or a boorish, foolish, inappropriate man; jackass is not really a swearword, but does have strong negative connotations when directed at a particular person.

In the 19th century, when All Hallows’ Eve gained in mischief and superstition, country boys  used to carve turnips and other root vegetables, light them, and roam the highlands at night to spook people. The Jack o’lantern as a term is thought to have come from an Irish legend about a man called Stingy Jack, who was mean-spirited and selfish and thought he could trick the devil into not coming after him. But, when Stingy Jack died, the devil did come after him, condemning him not to hell, but to forever wandering the earth in the darkness with only an ember of hellfire to light the way.  When Irish immigrants came to America, the legend of Stingy Jack endured but the pumpkin became the vegetable of choice to carve on Halloween.

I expect this year’s Halloween to be a rather subdued holiday, what with parties and haunted houses being discouraged and trick-or-treaters likely to be kept at home.  Even I restrained my  decorations this year. As a friend of mine remarked recently, “As if the Covid and Trump aren’t scary enough — who needs Halloween?”

Certainly, 2020 has been a scary year all along, made scarier still with the angst and uncertainty ahead. But it seems to me that Halloween this year holds a special metaphoric meaning, followed as it is by All Saints’ Day on November 1, All Souls’ Day on November 2, and the US elections on November 3. If, indeed, we citizens are in a battle for the very soul of America, then we’d better pray that voters recognize the power of voting and carefully consider the ramifications of their choices. Otherwise, we are all condemned to become Stingy Jacks, tricked by the devil and destined to roam into the darkness of the future with only the embers of hellfire left for light.