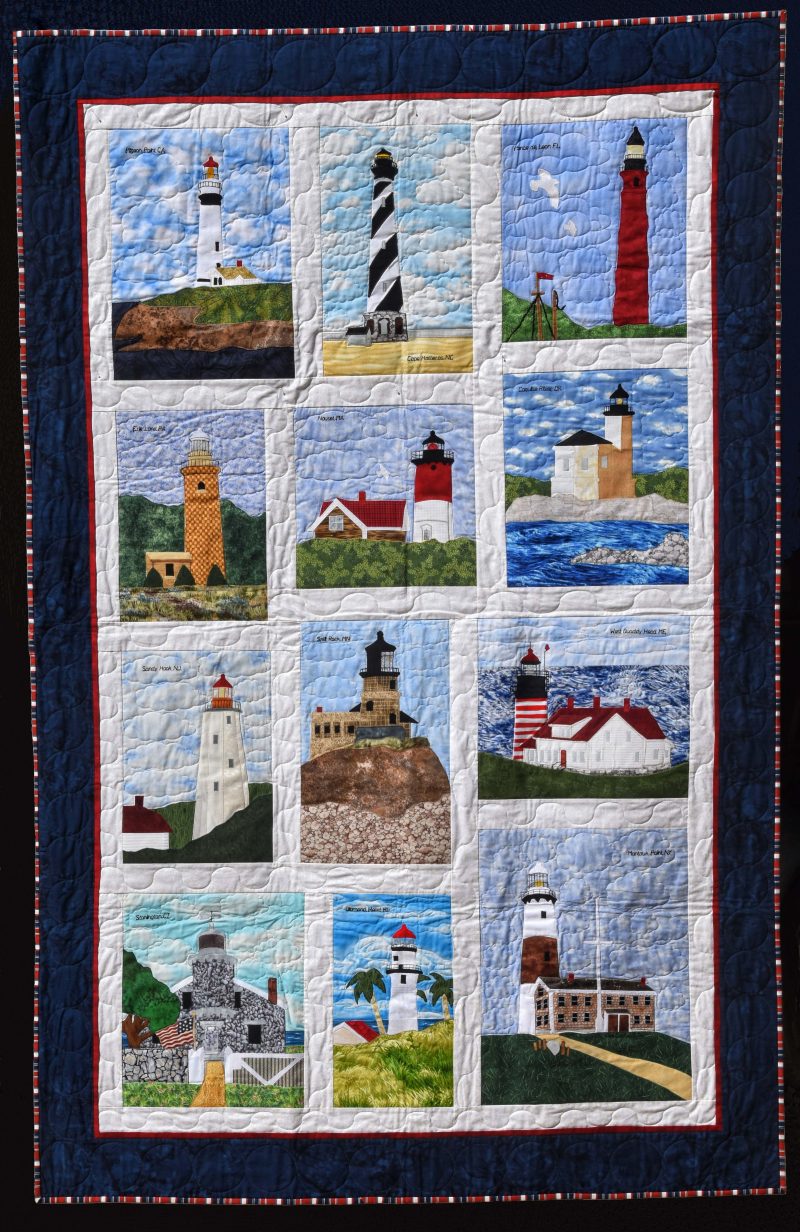 The lighthouse: a symbol of hope, a sign of safety, an icon of our seafaring past. By most estimates, there are approximately 700 lighthouses in America of which roughly 75 percent are still operational.  Except for the very first lighthouse, the Boston Light on Brewster Island (built in 1716; damaged in the Revolution and renovated in 1783), all are now automated. Today, the Boston Light is the only official lighthouse with a human keeper.

Of the ten oldest lighthouses in the U.S., six are in Massachusetts. Not surprisingly, with its rugged Atlantic Coast and its long, dangerous seafaring history, the East Coast has about four times as many lighthouses as the West Coast. Interestingly, however,  Michigan has more than any other state  — all that Great Lakes trade and exploration, you know.

I grew up on the Texas Gulf Coast, where the mood was calm, the waters were warm, and the beach was full of shells and sea glass. When we went to Padre Island we would drive until there were no more people in sight before we planted our umbrellas, even in the summer. There were some lighthouses down at the bay, the Matagorda Island Light in Port Lavaca (1873), the Port Aransas Light (1857) in Aransas Pass, and the Point Isabel in Port Isabel (1852), but I never gave them much notice.

My first introduction to the North Atlantic coast was  going “down the shore” (as my New Jersey relatives and Bruce Springsteen put it) to Atlantic City when I was in college. My laid-back Gulf Coast experience and those care packages of salt-water taffy that my aunts had lovingly sent me over the years hardly prepared me for this bustling Miss America Boardwalk, the hoards of people, and the giant amusement park out on the Steel Pier. I was told that the beach was wide and white and beautiful, but who could see it blanketed solid as it was with bodies? It was wild and, besides, the water was cold.

Once married and living in New York, my first trip to Jones Beach on Long Island offered a similar experience.  My mother-in-law insisted we go to the beach for breakfast, so we got up at daybreak and fought heavy traffic on the Southern State in order to secure parking in a lot close enough to the beach to lug all the food and supplies and to garner a place on the sand by a grill. Whew!  It too was wild, the water was 55°, and we were done by 8 a.m..

Beach experiences were similar all along the Northeastern Coast, in New York, New Jersey, Massachusetts, and even in Connecticut where we eventually settled along Long Island Sound in Fairfield County. The beaches, lovely though they were, were always crowded, the water was always cold, and the traffic was always horrendous. It sort of took the fun out of beach blanket bingo.

So, while I never came to understand the attraction of the beach in summer for Northerners, all that time sitting in traffic and all that time walking around in coastal communities did lead me to finally notice lighthouses and to begin to appreciate their unique place in our history. I first “got hooked” in New Jersey by the Sandy Hook Light* with its 95 steps; it is the oldest working lighthouse in the U.S. (1764). Then I fell in love with the Montauk Point Lighthouse* (dating from 1796), a National Historic Landmark situated on the easternmost point of Long Island Sound in the town of Montauk. Over the years in Connecticut, almost all the lighthouses (20) along the Coast became familiar to me. Some are typical New England style, but many are unusual and distinctive, sitting as they do out on shoals in the water or clinging to a rocky ledge. One of my favorites all the way out at the end of the State is the Stonington Harbor Light* (1840), which is no longer a working lighthouse, but now a lighthouse museum.

And then there is Massachusetts, with its 192 miles of coastline and 60 lighthouses, 14 of which are on Cape Cod. And it was here at Thanksgiving 22 years ago where I finally, finally discovered the secret to loving the beach in the Northeast. For me, that love is not found in the summer, but in the late fall when the crowds are gone, the fading light reflected off the water is hypnotic, and the fine mist of the Atlantic floats over the seashore like a dream. This is New England at its moody best, evoking whaling history and 19th century novels, its lighthouses illuminating thought and inspiring hope.

I have written before about how my family and I came to make Thanksgiving on Cape Cod an annual tradition, one that stopped abruptly once we relocated to Texas. (“Turkey Trotting,” 11/20/16)  This year, we are reviving that tradition and returning for the holiday to the Chatham Bars Inn “at the elbow” in Chatham. Along with visitors and locals alike, we will no doubt stop at one of the most-beloved and oft-photographed active lighthouses on the Cape, the Chatham Light. Originally built with wood in 1841, it was later replaced with two new cast iron towers in 1877, one of which was later brought to Eastham where it became the Nauset Light*. The former keeper’s house of the Chatham Light is today a U.S. Coast Guard station where on-duty personnel operate search-and-rescue missions, enforce maritime law, and monitor Homeland Security.

Having fallen in love with Cape Cod and become so enamored with lighthouses, I eventually made a “block-of-the-month” quilt called “Beacons of Light” (above) depicting twelve well-known lighthouses around the country, four of which are highlighted in this text (noted by *).  I signed on to this ambitious year-long project, which took me two years to do— where else? — at Heartbeat Quilts in Hyannis. (Sadly, the shop is no longer open.) When not displayed in my studio, the quilt finds use in our guest room, aptly called “the Cape Cod room” because it is decorated in white and blue and features works by Cape Cod artists.

It’s been ten years since we spent Thanksgiving on the Cape, and I am eagerly looking forward to returning, even without sufficient winter clothes should there be snow. The Cape means peace to me; it has always offered a gentle reminder to remember the past, give thanks for the present, and sustain hope for the future. We all need those beacons of light to keep us on course, especially in troubled waters.