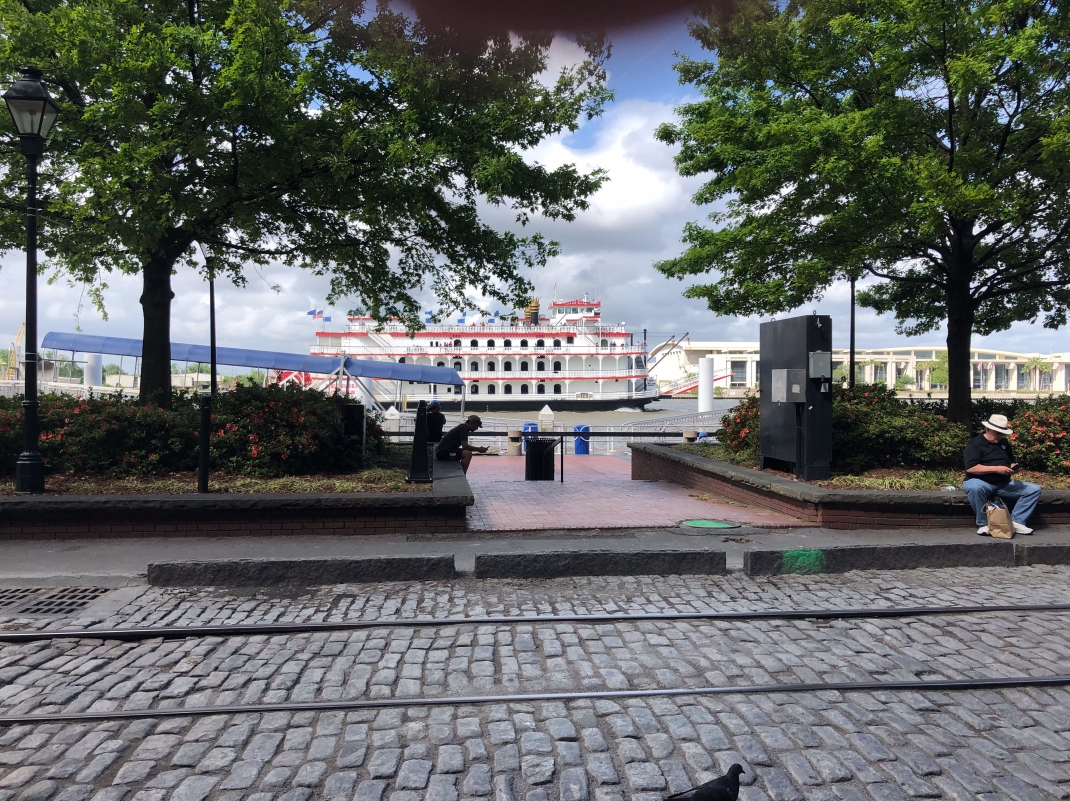 Said to be America’s first planned city, Savannah was initially laid out in a series of grids marked by wide streets and lush public squares, 24 of them to be exact, 22 of which still exist and still invite leisurely strollers and sitting people-watchers today.  General James Oglethorpe, who landed on a bluff along the Savannah River in 1733, founded Georgia, named it after King George II, and thus established the 13th and last of the original colonies in the New World. Savannah was Georgia’s first city and is still, arguably, its most beloved.

Savannah was thrust, rather abruptly, into the public spotlight in 1994 with the publication of John Berendt’s best-selling non-fiction narrative, Midnight In the Garden of Good and Evil, later made into a movie starring Kevin Spacey and Jude Law. The murder of young ne’er-do-well Danny Hansford by wealthy art/antiques dealer Jim Williams in 1981 is the central event of the of the story, but the scandalous intrigues, eccentric characters, and romantic settings tell a parallel, equally-compelling story of Savannah herself.

Berendt, a columnist for Esquire, spent eight years living between New York and Savannah, so he knew the city about as well as any outsider could. Ultimately, Midnight is a commentary on class and wealth, history and tradition, gentility and decay in a proudly Southern city. It is recounted with a talented writer’s realistic eye and a part-time resident’s understanding heart.  As a non-fiction novel, Midnight would do Truman Capote proud; it is a book I greatly admire and one I wish I had written.

But, I didn’t, so I did the next best thing: recently, I finally visited Savannah for the first time to inspect the exquisitely restored 18th and 19th century homes in the historic district (a restoration project in which Jim Williams was a leading force), to see the Mercer House on Monterrey Square where Williams lived and the murder took place, to gaze upon the serene statue of the “Bird Girl” that stood in Bonaventure Cemetery depicted on the cover of the book (she is now housed in the Telfair Museum due to hoards of tourists trampling the cemetery), and to sense the “ghostly presences” darting among moss-hung oaks in the morning mist. It’s all there just as described by Berendt and still attracting throngs of visitors every year, along with carriage tours and riverboat rides, art museums and historic landmarks, shrimp and grits and fried green tomatoes — and yes, Paula Deen’s The Lady and Sons Restaurant.

Rosemary Daniell, a Savannah writer, has pointed out that despite the city’s beauty, it has a dark side and that “…the present runs concurrently with the past” (quoted in After Midnight in the Garden of Good and Evil by Marilyn J. Bardsley). Having lived in Memphis myself for five years, I’d say that description easily applies to other cities in the deep South, cities such as New Orleans or Charleston, Richmond or Montgomery.  They display Southern charm and warm hospitality on the surface, even as their societies remain insular and immutable. Attitudes and prejudices have long, deep roots in old family trees and create a general distrust of outsiders that impedes fundamental social change even today.

Some variation of closed communities exist almost everywhere, of course, whether it’s in clubs and organizations, or schools and neighborhoods, but living in Memphis made me realize that Texans are not really Southerners in the generally understood way. First of all, Texas was late, last, and reluctant to join the Southern cause in 1861; its pro-Union Governor Sam Houston refused to pledge allegiance to the Confederacy. Much of the state was still a frontier during the Civil War years, and so only East Texas, where cotton and sugar cane were cultivated, was commonly considered part of the deep South, and a far westernmost  boundary of it at that.  Secondly, people in the rest of the State, including my own German immigrant ancestors, were busy establishing local law, developing land and cattle, and trying to acquire the renowned ranching skills of Mexican and Spanish caballeros. Thus, those Texans, along with the Native Americans who still inhabited the area, identified more with the culture and traditions of the West/Southwest than with those of the deep South. Most Texans still do.

And then, finally, came the discovery of oil in 1901 — and with it came all the roustabouts and wildcatters and fortune hunters that forever dispelled any pretensions of Southern charm and gentility.  Ironically, Spindletop, that first gusher, was in East Texas near Beaumont.  For a vivd picture of how oil and cattle came to dominate the Texas culture, read Edna Ferber’s Giant (or see the 1956 movie starring Elizabeth Taylor and Rock Hudson filmed near Marfa in West Texas).

Lest all this history and literature begin to bore, let me explain that for me part of the pleasure of travel is the anticipation of the trip, including the reading and “studying up” in preparation. Granted, books and films and travelogs can easily rely on clichés and promote stereotypes, and someone else’s view/review of a place can never serve as a de facto endorsement or dismissal, any more than a movie review or a restaurant critique can guarantee the appropriateness of that choice for a particular patron. Nevertheless, I try to learn as much as I can about a place in advance because, in spite of the delights of serendipity, I simply cannot imagine arriving cold without any historical or cultural context to enhance my understanding of where I am and what it means. I guess that’s the teacher in me, or the writer, or the skeptic…

So, did I enjoy the trip to Savannah? Did I have memorable meals, get inspired by great art and architecture, and feel calmed by the gracious romance of those shady squares? Did the sight of riverboats down at the wharf make me smile, and did I even experience a bit of “serendipity” on an unexpected visit to Tybee Island?  Yes, emphatically, I did, and I enjoyed it all for several days while staying at the Planters Inn (where John Wesley’s parsonage stood in 1736). My review: Savannah is a great place to visit.

But I wouldn’t want to live there.