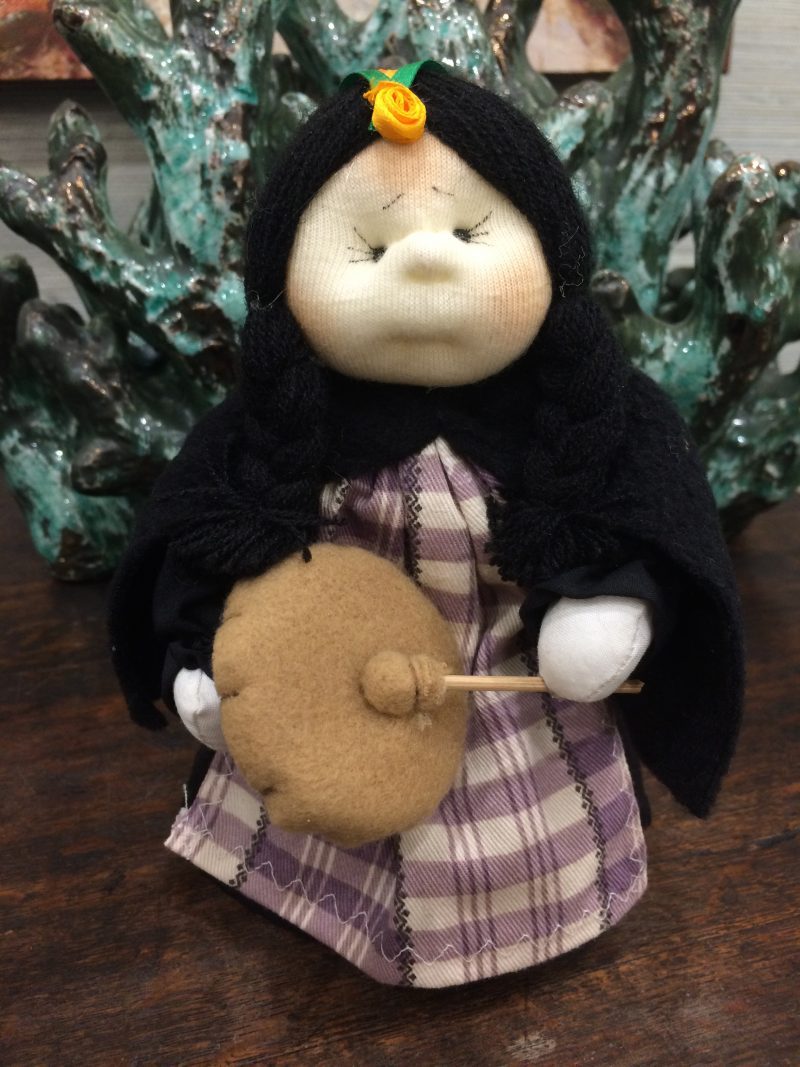 My Mother collects dolls, mostly small, unusual dolls, with which she gradually began to decorate her Christmas tree each year. Over time, as I have travelled to far-away places, I have added to her collection with dolls representing those cultures. So now, her tree has become pretty much an international display of figures from all over Europe and Asia, Africa and the Middle East.

My husband and I just returned from a long-planned trip to South America, to Chile and Argentina with a brief foray into Brazil to Igauzu Falls. The original idea when we booked the trip, besides the fact that we hadn’t been to South America before, was that I would get to do the tango in Buenos Aires for my big birthday this year. By happy coincidence, Canadian friends of ours whom we had met years ago on a trip to Egypt, were looking at the exact same tour, so we decided to join them. That, of course, was six months ago, well before all hell broke loose in South Texas, and in my life. We were still debating about actually making this trip up until a week or so before departure, but by then my Mother was settled in at her new residence and our son was available to handle things. “Go,” my Mother said.  So we did.

Usually I start preparing for a big trip to a place I haven’t been before months in advance. The anticipation and planning, after all, are part of the joy of travel. For this trip, I had ordered some guidebooks and histories of the regions we would be visiting, along with a couple volumes of Latin American literature, and even downloaded some review exercises to “brush up” on my Spanish. Since I knew there would be treks through Patagonian forests and national parks in the Lake region, I also intended to double down on my morning walks and exercise regimen and to shop for travel clothes with “layering” in mind to handle the varying temperatures in South America in the spring. Most of all, I hoped to be rested, as well as ready.

But of course I wasn’t, rested or ready.  Just as my books began to arrive and I started working on my Spanish lessons, Mother got sick, Hurricane Harvey hit, her house had to be repaired, cleared out and sold, and I basically ended up spending four months living in Victoria, running home only on weekends.  As the departure date grew nearer, my hopes of making the trip at all diminished accordingly, along with my energy.  My back, neck, knees, legs, feet — everything —hurt; thoughts of the tango made me tired.

I’ll admit it: the trip was a challenge. The travel was arduous, with long flights down to Santiago and back from Buenos Aires, and trains and planes and busses from one region to another in between. The schedule was rigorous, with lots of early starts, long days, packing and unpacking, and yes, those four and five mile nature treks. But the landscapes were spectacular, the people warm and gracious, and the small group of ten of us with a Chilean guide proved amiable traveling companions. I learned so much, which I suppose is one advantage of being so poorly-prepared to begin with.

We began in Chile and our first stop was to visit La Chascona, the Santiago home of Pablo Neruda, well-known poet and diplomat and Chile’s only Nobel Prize winner for literature (1971). It made sense to start there since this was the only famous person/site I knew anything about in Chile, other than Allende, with whom Neruda was closely aligned. The house, like the man and his work, is colorful and varied in style, showcasing Neruda’s many hobbies, his flair for entertaining, his love of literature, and his passion for Matilde Urrita, his secret lover and third wife with whom he built the house.

Santiago is a huge city of 7 million people with broad plazas and traffic to match. Yet, no one honks their horns, no one shouts or curses, no one takes out a gun and shoots you in road rage. (What a pleasant change from life in the States these days!)  The Chileans, I later learned, are called the “Gentlemen [women] of South America,” and I see why. Everything is so civilized; inside in the shops and cafes, people are calm and generous, relaxed and unhurried. We take a long walk to visit the Fine Arts Museum, then find ourselves in need of a taxi back to the hotel. We stop into a lovely restaurant, in which we have not dined, to ask them to call a cab, which they gladly do, and offer us a place to sit and a free drink while we wait!

We continue on in Santiago, visiting the Museum of Pre-Columbian Art, the Plaza de Armas, and the Metropolitan Cathedral, before going on to the wine country and to learn about Chilean cuisine and the organic, biodynamic wines produced here. Then it’s the Lakes District and beautiful Puerto Montt. We discover history along with geography: the history of the Mapuche, the ancient indigenous people who date back to 500-600 BCE, who still maintain their culture and traditions and who claim roughly 9 percent of today’s Chilean population.  Mapuche means “people of the earth,” and that is an apt description of Chileans in general. Their dignity, their respect for nature and the environment, and for each other reflects their ancient heritage.

In short, who knew? Certainly not ill-prepared I, who promptly fell in love with Chile in five days, who found it restorative and healing and restful. I brought back a doll for my Mother’s tree, a machi (see above), a good witch doctor who is a woman of central importance as a healer in the Mapuche culture. She knows herbal medicine, can interpret the winds of weather, is a spiritual advisor and a social mediator. I hope the spirit of the machi stays with me, and I hope she will help my Mother feel better and enjoy her Christmas tree.