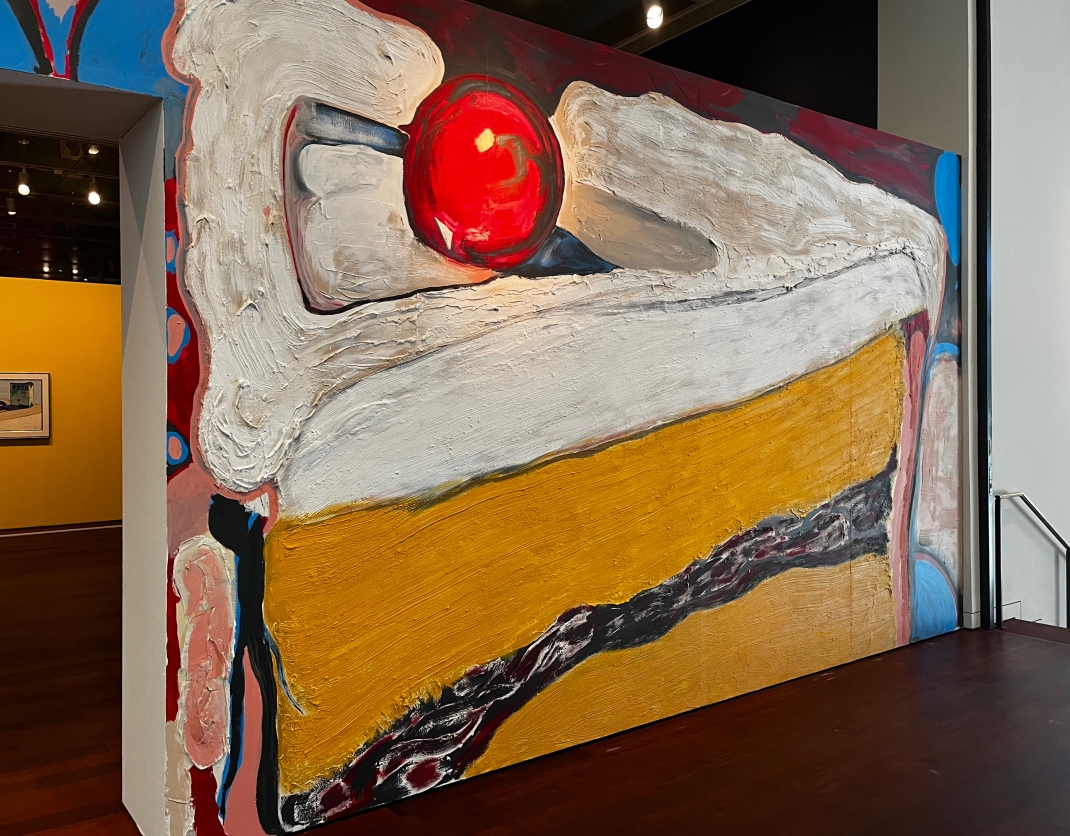 Wayne Thiebaud died on Christmas Day. He was 101. The name probably doesn’t mean much to you — it didn’t to me either until a few weeks ago —but you would no doubt instantly recognize his delightful paintings of cakes, pies, and ice cream cones. Often associated with the Pop Art movement of the 1960s, Thiebaud hardly shared the consumerist satire of Pop artists like Warhol however; rather, he celebrated the simple objects of everyday life with playful honesty and genuine respect. Whether it’s a piece of pie, a pair of shoes, or a picturesque landscape, each subject is given his undivided attention and elevated from the merely mundane to the realm of reverent nostalgia. His art inspires us to notice.

Now that we are in the throes of yet another Covid wave and in the thick of the cold, grey days of winter (even here in South Texas), I have been looking to be inspired for my next art quilt project, something light and humorous. For some reason, I had started thinking about macaroons, visualizing them lined up on a table, “marching,” if you will, toward an afternoon respite. I even  had a title: “The March of the Macaroons.” Never mind that I don’t really like macaroons myself, they are colorful and cute and would be well suited to the small composition I’m planning to donate to a silent auction fund-raiser at my Studio Art Quilts convention later this spring.

Not only do I not like macaroons, I don’t bake them or buy them either, so that meant that I had to do some research on the assorted kinds and colors commonly made.  And it was in the exploration of macaroons and their many, many manifestations on Pinterest that I discovered, or should say re-discovered, the artwork of Wayne Thiebaud, thereby propelling me into one of those on-line detours down a rabbit hole so familiar to researchers everywhere.

I soon forgot all about my macaroon project and, instead, became engulfed in ah-ha moments of recognition as I explored Thiebaud’s cityscapes, landscapes, portraits, hats, shoes, fast foods, and of course, his “confections”. I ordered books from Amazon and notecards from Pomegranate; I read critical reviews of Thiebaud shows in newspapers and magazines,; I explored the work in his gallery, Acquavella, and…  And then he died. Here was an artist whose work I had often seen and admired over the years, and yet I hadn’t even known his name, much less how to pronounce it (T-bow). Shame on me for never bothering to find out.

I read his obituaries and learned about his long and productive life. Still working and in his studio every day even at the age of 101, he was gone too soon I felt, before I had a chance to really get to know him. I was sad. But then, as if by some sort of timeless artistic magic, there suddenly appeared an exhibition of his work right here at our own McNay Art Museum in San Antonio: “Wayne Theibaud 100: Paintings, Prints, and Drawings.” Organized by the Crocker Art Museum in Sacramento (Theibaud’s home city) in honor of the artist’s 100th birthday, this traveling exhibit is about as up close and personal as you could get to the artist, given how humble and unassuming he was, and given that it features many of his best-known works. The show at the McNay has been beautifully staged (see the stylized entry above) and designed to “…evoke reflection on our own experience with the people, places, and foods we love.” (McNay curator René Barilleux’s introductory statement)

After attending this exhibit last week, I came home enriched by new knowledge and inspired by new ideas. I was even motivated to take a three-hour ZOOM class on fabric painting! And now I am ready to begin my new little project. Forget macaroons. In homage to Wayne Theibaud, I’m going to depict the the foods I love from my childhood, the foods that evoke memories of shared afternoon delights with those I loved: treats plain and simple on a blue checkered cloth from the DQ (Dairy Queen.)  No, I won’t copy Theibaud, but I will pay attention to his aesthetic preoccupations with light, space, and color.

Ideas for my next project(s) always make me smile before I even begin, which is how I will get through what may prove to be another difficult year ahead. Meanwhile, that promise to practice an “attitude of gratitude” by writing my Christmas thank-you notes, which ended my last post of 2021, is sure to get completed now that I have those Theibaud notecards from Pomegranate to write them on.  That, in itself, is a winter’s afternoon delight!